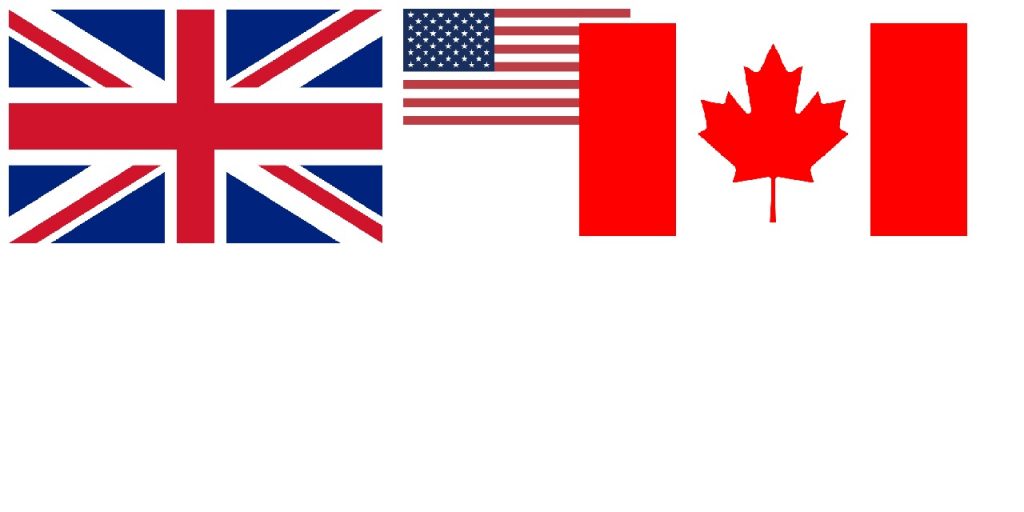 Differences between studying in the UK, the USA or Canada

Future university students have a lot of important decisions to make before applying to university. The first and most common tends to be ‘what do I want to study?’ which can be already a stressful enough decision to make, as young people face a lot of pressure to make decisions about their future at quite an early age.
But, then there is also a decision to be made about the whereabouts of the university.

Considering that we live in a globalised world, most employers value applicants who had spent time studying abroad. And since English is the language of the world, each year, more and more international students apply for universities in the UK, the USA and Canada. Notwithstanding the fact that the British and North American Universities are some of the most highly ranked in the world.

So, let’s take a look at some of the key differences in the three countries.

UK universities are incredibly diverse and multi-cultural. With around 450,000 international students from over 180 countries every year, it is by far the most ethnically diverse out of the 3. On average every 10th student at a British University is from overseas, this number does vary from one university to another, as universities situated in bigger cities tend to attract more international students.

This then means that by choosing the UK as your study destination you will not only learn a great deal about British culture, but will also be able to meet people from all over the world and learn about their cultures and customs too, this would provide you with a global education experience.

Having mentioned the academic benefit of a multicultural study experience, UK’s location can be also seen as a huge benefit. Other European countries are just a short flight away, meaning that many international students use their holidays to travel around Europe.

In the introduction I mentioned that choosing a course can be a stressful affair. British Universities offer very specific courses. Meaning that from day one you will be specialising in your subject, without taking up many general modules. Generally speaking this does not provide students with many opportunities to study broader subjects and concepts.

In case that you do decide to change your course after a year of study, in most cases you will have to re-do the 1st year again, unless the courses you are changing to are very similar.

Therefore, if you know you are passionate about a certain subject, a British university will provide you with the possibility of getting stuck in it from day one without too many general subjects.

Another advantage is that many programs in the UK, with the exception of Scotland, award bachelor’s degrees after three years. Thus, international students can save a year’s worth of tuition.

International students who study a full-time degree course at university are allowed to work up to 20 hours part-time during term and full-time​ during the holidays on a student visa. Meaning that if you wanted to take up some work experience, or even a paid internship position over summer to boost your CV, you wouldn’t have any trouble in doing so!

The downside however is that after graduating it isn’t always easy to stay on and create a life in the UK. Because, since April 2012, the UK government tightened the rules for the visas: Tier-4 (student) and Tier-1 (post-study work). In more simple terms it has now become more difficult than previously for international students to get a job in the UK upon completion of your studies.

In terms of overall numbers, with around 700,000 international students each year the total is by far the highest out of any other country in the world. Proportionately however, that only accounts to a few % of the total student population given the large size of the US. Therefore US universities are not as near as diverse as the universities in Britain.

Unlike in the British universities, in the North American system (Canada included), studies begin with more broad subjects, allowing students to decide what their true interests are. Also, students are able to select a major and a minor, where they specialise in one subject, with a smaller focus given to another.
Moreover, the American universities quite possibly offer the widest choice of subjects available in the world.
Unlike in the British universities changing courses or even institutions is a lot easier and more welcome than in the UK. For instance, some international students find it easier to start their university life at a smaller college in order to adapt to the American way of life and perhaps better their language skills, and after a while they transfer to a larger University.

The fees in the United States are notoriously high. Average cost being around $20,000 a year at public universities, and that number can be significantly higher at some of the private institutions, with no standard fees and regulations, universities are able to set their own prices.
Undergraduate courses tend to take 4 years, so there is an extra year compared to the UK.

Similarly to the UK, remaining in the US after your studies can be tricky with regard to visa regulations for graduate students.

Generally speaking the system of education in Canada is somewhat similar to the one in the US. The courses tend to be more general at the start and you are also able to do a major and a minor.

Undergraduate studies can take between 3 and 4 years.

International students may be able to support themselves whilst at university, since their study permit allows them to work on or off campus during term time or during the academic breaks.

In comparison to the UK and the US, the Canadian universities tend to start their academic year in September and end it in April, even though this means that their breaks are shorter throughout the academic year, the longer summer break allows more time to work or travel.

When students graduate, The Post-Graduation Work Permit Program allows graduates who have been studying in Canada for more than eight months to stay on to work after graduation.

Unlike the US, and the UK where it may be a tedious process of obtaining a work visa after graduation, Canadian government actually announced plans in 2014 to double the number of international students within its border by 2022. They see international student recruitment as a form of attracting the best, young talent to their country, who will be able to work and thus contribute to their country.

Overall, these are just general outlines of what each country has to offer. But of course there are many more important factors that play just as big of a role.
Climate and culture or even the right city can be just as important when choosing university especially in a foreign country.

Regency Education helps with schools and university applications. Please get in touch for a free consultation on emails contactus@regencyeducation.co.uk
Skype: regencyeducation