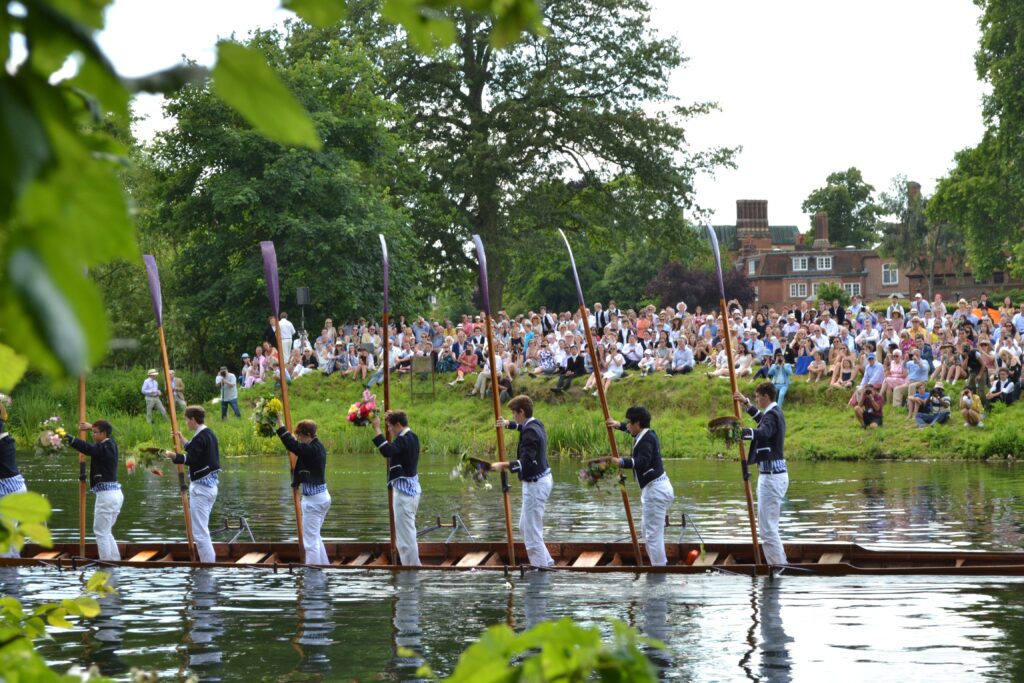 November 2021. How and why British independent schools were founded.

In this issue we’ll take a look at how and why British independent schools were founded. This requires a (very) brief foray into the history of education in the UK, a quick(-ish) summary of the differences between the terms public, private and independent when applied to UK schools, and a short synopsis of what it means for a public school to be granted a Royal Charter. Following this general overview of the sector, we’ll aim to give you a more specific insight into two independent schools: Marlborough College and St Edward’s, Oxford.

As ever, it comes down to a question of semantics, but there is certainly common ground between all three. What they share in a 21st century context is the way they’re financed, the relative autonomy they have over how they’re run, and their wide reach.

They aren’t ‘local’ in the way that state-funded schools are. Their pupils hail from far and wide, with many coming from overseas. That’s why these schools are synonymous with boarding – although most now welcome day pupils too. In contrast, state-school students need to provide proof they live within the school’s catchment, and, if over-subscribed, places may even be allocated based on a pupil’s proximity to the school.

Instead of being funded by the state, through tax-payer’s contributions, these schools charge fees. However, many offer bursaries or scholarships and all have entry requirements based on talent and potential.

It’s this fee-paying status that in part grants them the independence to operate outside government regulations. But that doesn’t mean complete free rein. They must conform to official standards of education, health and safety. They’re also subject to regular inspections by the Independent Schools Inspectorate and / or by the UK Government equivalent Ofsted. And crucially, at secondary level they’re obliged to prepare pupils for the same public assessments and examinations as state schools – although in many cases they will offer pupils more varied (though equivalent) options, such as the IB or Cambridge Pre-U, than their state counterparts, as well as less prescriptive syllabus.

So those are the similarities… what about the differences?

There is, however, a subtle difference between the way independent and private schools are governed. Independent schools are overseen by a board of governors or trustees, whilst private schools may be run by their owner with no governing body. Linked to this, independent or public schools are classified ‘not-for-profits’, meaning all proceeds are ploughed back in to the organisation and no individual profits (beyond their salary, expenses, etc.). This is one of the reasons non-private schools are deemed ‘public’ – because they exist for the benefit of the public rather than an individual or even a group of shareholders.

The term ‘public’ also has its roots in two historical factors. In1868 a small group of seven then boys-only boarding schools gained independence from the Crown, church or government to be managed instead by a board of governors (so you can see how confusingly interchangeable the terms have become, given that this model of governance now distinguishes an independent / public school from a private one!)

The original seven ‘public’ schools were Charterhouse, Eton College, Winchester College, Harrow School, Rugby School, Shrewsbury School, and Westminster. Although they became known as ‘public’ to differentiate from them being governed by the monarchy, church or state, another defining characteristic was that a single benefactor founded them during the late Middle Ages or Renaissance period to educate local boys from humble backgrounds.

Several centuries later, more families could and would pay the market rate for tuition at such prestigious establishments, which was one of the factors in the move to a boarding model. Some people argue that this is the reason they’re called ‘public’ – to differentiate from a more local model. That would have meant a retrospective application of the name though, since several centuries elapsed between the founding of the first public school and the transformation to the boarding archetype.

From around the 17th century, parents considered these so-called public schools as a route to Oxbridge. The rigorous syllabus and high standard of teaching prepared pupils for higher education at esteemed institutions – or for public service in government, law, healthcare or the military. The latter being arguably another reason why these distinguished training grounds were known as ‘public’ schools.

So, the challenges of semantics and syntax versus the sense of history, heritage and prestige synonymous with this sector, means that although ‘independent’ is by and large the most common, accurate and preferred name for not-for-profit schools overseen by a governing body – many people still refer (confusingly) to those original seven public schools by their original designation of ‘public.’ So within the sector, the term public has come to refer specifically to the oldest and longest-established institutions.

– Winchester College, Hampshire – chartered in 1382 by William of Wykeham, bishop of Winchester, and opened by him in 1394.

– Westminster School, west London – re-established by Queen Elizabeth I in 1560.

Royal Charters – what do they mean for schools?

Although these seven schools cemented their ‘public’ title when they were made independent of the Crown, church or state in the second half of the 19th Century, the monarchy always had – and continues to have – a key role to play in their prestige.

More than 35 independent schools have been granted Royal Charters since the 13th Century. The original purpose of a Royal Charter was to create a legal entity (a town, city or company) and define its purpose. Then and now, being incorporated by Royal Charter carries a sense of permanence and prestige, reflecting the high status of that entity. New Charters granted in the 21st century tend to be reserved for bodies that work in the public interest (such as professional institutions and charities) that ‘demonstrate pre-eminence, stability and permanence in their particular field’, according to the Privy Council office.

The Privy Council, a group of advisors that dates back to Norman times and is one of the oldest parts of UK Government, has comprised leading churchmen, judges, diplomats and military leaders, along with senior members of the House of Lords and the House of Commons over the centuries. The Lord President of today’s Privy Council is Jacob Rees-Mogg and the group continues to advise the monarch on granting Royal Charters. Organisations incorporated by Royal Charter remain self-regulating – neither the state nor the sovereign play a part in their governance. It’s simply a mark of distinction that acknowledges status and performance in any given sector.

The earliest Charter recorded on the UK Government’s list was granted to the Weavers Company in 1155. Royal Charters for the Universities of Cambridge and Oxford followed in 1231 and 1248 respectively, with these institutions’ individual colleges receiving their own Charters over the centuries that followed.

Named Public School of the Year at the Tatler Schools Awards 2021, Marlborough College was incorporated by Royal Charter in 1845, founded by a group of Church of England clergymen, with the backing of the Archbishop of Canterbury, to educate the sons of the clergy.

Now it’s one of the largest co-educational, independent, full-boarding schools in the UK, with 15 boarding houses, accommodating around 1,000 pupils aged 13 to 18.

With an impressive alumni roll call featuring royals, singers, poets and politicians, competition for places is fierce. Parents used to be able to register their child from birth, but recognising that finding the best fit for your child is the most important factor in choosing a school, the school now welcomes applications from pupils four years in advance of their start date. Historically, the school has given unconditional offers, but now expects all overseas and home students to sit the Common Entrance exams.

A big school in a beautiful setting, it suits all-rounders who will thrive under academic pressure. Academic track record is strong, it’s a renowned feeder school for Oxbridge and it offers a wide range of choice with 30 IGCSEs plus Pre-U and IB options in addition to A Levels.

Sports are a key part of Marlborough life and the list and facilities are impressive. Although there’s a focus on key sports (rugby, hockey and cricket for boys; hockey, netball and tennis for girls), the hydraulic bottom to the 25-metre pool, enabling a wide range of water-based sports from diving and sub aqua to canoeing and water polo, gives you a flavour for the diversity of the sporting offer.

Marlborough also boasts a large theatre and its own observatory that houses what could well be the largest telescope in full-time use in any school worldwide!

Also founded by the clergy, St Edward’s is just 20 or so years younger than Marlborough College and is slightly smaller, accommodating around 60 pupils in each of its 13 boarding houses, three of which are co-educational.

Located in the north of the city of Oxford, sports grounds and facilities surround an attractive Victorian red brick quad in a 100-acre estate. The school celebrated the opening of its new Academic Centre this year, complete with library, café, airy classrooms and thousand-seat hall. So there’s no shortage of space, even though it’s one of very few city-based boarding schools in the UK. The dreaming spires of the city make a stunning backdrop, but it’s a very different feel from the rolling Wiltshire hills where Marlborough College nestles, so would suit someone at home in a town or city instead of the countryside.

Arts-wise, St Edward’s not only owns and runs the renowned North Wall Arts Centre, where pupils can perform and be inspired by the varied programme of visiting shows, but also boasts the Ogston Music School. Alongside 20 practice rooms, 7 ensemble rooms, and a large recital/rehearsal space, there’s a recording studio and music library for its two chapel choirs, symphony orchestra and jazz ensembles.

Like Marlborough, it teaches IB alongside A Levels, enabling sixth formers to retain breadth alongside depth. This breadth to their education is something alumni reference as a real plus to their time at ‘Teddies’ – as the school is affectionately known.

The school has been piloting the same focus on breadth at GCSE level, eschewing a more prescriptive syllabus in favour of interdisciplinary links that enable students not only to pursue their own interest within each subject, but also to get a flavour for future careers with subjects like Applied Sciences, Design and Entrepreneurship, and Music and Music Technology. Other schools are considering this innovation with interest.

The school takes the same approach to sport, believing that ‘the best preparation for adult life is a breadth of opportunity’. As its website says, it’s always had a ‘first class sporting reputation… compet[ing] in a strong and demanding fixture list against other schools’ but crucially, acknowledging that playing sport at school isn’t just about being at  the top of your game, but can also ‘encourage and foster team spirit, camaraderie, sportsmanship, leadership, discipline and increased self-esteem’.

Historically considered a good option for sporty, less academic children, Teddies has changed this perception with an increasingly strong track record of academic success – in the same way that Marlborough has – over the past decade.

Teddies retains its lower Common Entrance threshold in comparison to some independent schools, and places its emphasis firmly on all-round education and a nurturing, friendly environment rather than a purely competitively academic one.

For more insights into the UK’s best independent schools – and advice on the perfect fit for your child – please get in touch.